“Most of us have a weakness for remote places, perhaps a product of the reckless pace of modern life, or maybe a throwback to our ancestral origins when things were, well, far less complicated for a start. Vrederus is such a place. Beautifully remote country, still and peaceful, full of the thread and stitch of nature, full of trout fishing at its best.

This is the kind of trout water you can feel relaxed about and just discover at your own good pace. The main lake is one of those big but still somehow pretty stretches, with a willow-lined bank winding into distant shallows. And as with all good lakes, the trout vary in size from ‘nice’ to pretty exceptional, at times ‘double-figure exceptional’. And there’re browns and rainbows, which is also nice, because so often browns are neglected, and as you know, browns are something else. I’ve taken most of my fish off the banks, but that’s because when Ed Herbst and I are traveling in the area we don’t pack float-tubes. Not because we shouldn’t. It’s just a matter of space. And there’s no-doubt the lake is best fished from a tube, or from the boat that Donie has provided, probably with an Intermediate fly line, say along the old river course and up towards the shallows. And in time Ed and I plan on leaving a couple of old tubes up here.

All of which makes a visit to Vrederus worthwhile, but to my mind the nearby rivers make it even more worthwhile. Maybe even exceptional. Ed and I have waded a few miles of them around Vrederus. I mainly use dry flies on these streams, because dries are great fun and because the trout are mostly naïve and rise pretty reliably to even half-decent presentations. The streams are typical quick-water, tumbling, clear and slender and the trout are typical high-mountain, wild rainbows, rakish and very pretty. Most of these streams don’t see more than a couple of anglers a year. And they run in majestic country, untamed, rough and dramatic, with more than just a light sprinkling of Bushman paintings in rocky overhangs. Raptors float the thermals – Black Eagles, Jackal Buzzards, Cape Vultures, Lammergeyers (we’ve seen them twice). You’ll also maybe come across the odd rare birds, like Mountain and Yellow-Breasted Pipits, Buff-Streaked Chats or the Hottentot Button Quail, and you’ll see stacks of not so rare but unusual birds, like Rockjumpers, Sentinel Rock Thrushes, and Ground Woodpekkers.

So this is Vrederus. It’s tempting to go on, but you probably have the picture by now. Perhaps I should just add that it’s one of those places where I consider the fly fishing to be as authentic as you get it. Come to think of it, it’s more than fly fishing actually. Fishing here is a whole experience.” 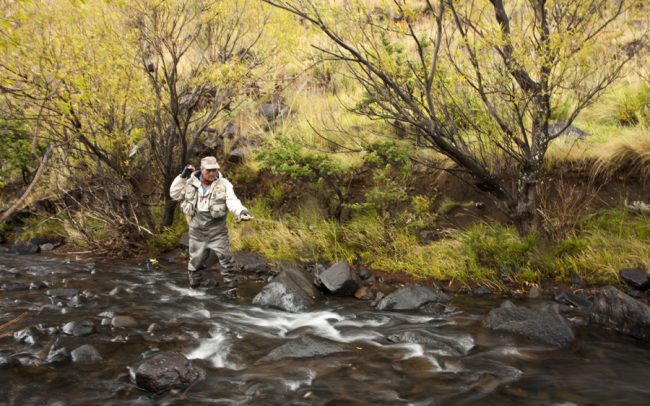 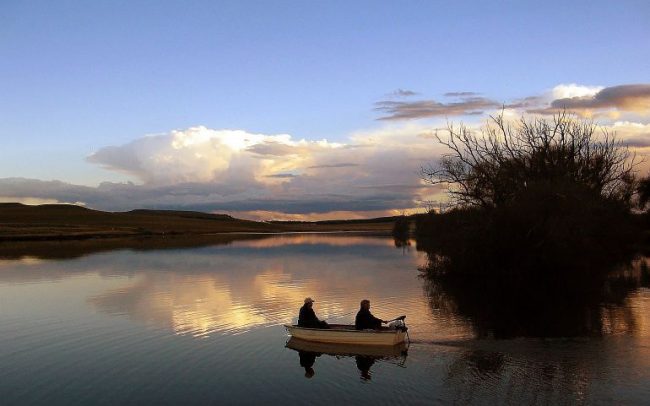 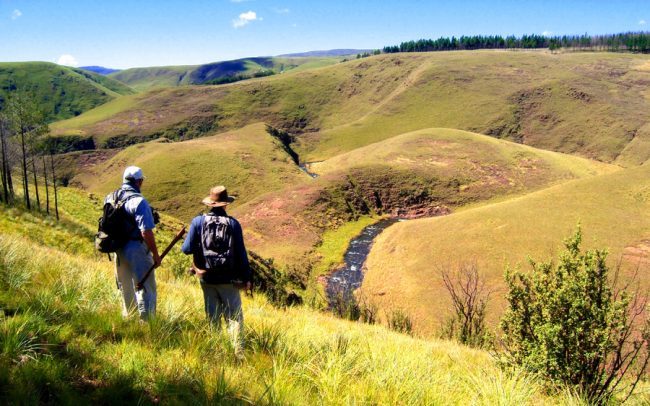 Vrederus provides the best of all worlds for the visiting fly fisher. Farm owners, Donie and Juan Marie Naude somewhat hesitantly first built a small rondawel in the hopes of attracting fly fishers to their dam. The combination of the beauty of the area, their hospitality, and the farm’s proximity to several outstanding streams quickly made it obvious that more accommodation was needed. A second and bigger rondawel was built and, as the visitor’s books in both dwellings indicate, most guests have either been to Vrederus before or have every intention of returning.

The dam provides outstanding fishing from the bank and more specifically from float tubes or the boat that the Naude’s provide. If you can bring yourself to wake at sunrise you will find that there are lots of early morning rises and trout can be spotted feeding hard in the shallows, sometimes with their backs out of the water. Sometimes at twilight there is a rise to midges that can make your hair stand on end. Your nerves get shot to pieces as fish feed madly all around you and lots of midge patterns and some form of light pinned to your vest are essential because trying to tie on another fly with shaking fingers after you have been broken for the umpteenth time is immensely difficult and immensely frustrating.

For small stream, light-line fanatics, Vrederus comes close to heaven. Bigger streams like the Tsitsa and Luzi are within an hour’s drive of the rondawels and the Tsitsa gorge, in particular, is a spectacular setting for a day’s fly fishing. The Swith stream, a tributary of the Luzi, is one of my favourite venues. As with most streams in this area it can only be reached with a vehicle that has a lot of ground clearance but I doubt if it sees more than a dozen fly fishers in a year. This is surprising because it is an exceptionally beautiful place to fish.

These are not streams for those who seek fish that are measured in kilos rather than centimetres. But with one and two weight rods and small flies they provide memorable angling. Not that the region lacks big fish but the bigger fish are to be caught in the bigger rivers of the area and, for me, they lack the tree-cloistered charm of streams like the Swith.

If you wish to introduce someone to fly fishing on streams, there can be few better places than the Swith or the Tsitsa. Both are full of trout that rise with alacrity to dry flies and take a nymph drifted below a strike indicator with conviction. During the course of a normal day a beginner will see lots of action and gain invaluable knowledge on how fish take a fly and how to react to that.

Edoardo Ferrero, the captain of the Italian team in the annual World Fly Fishing Championship, visited Maclear two years ago and described the area as “Paradiso!” but it is also a paradise for bird watchers and those who are fascinated by bushman art.

Vrederus is aptly named – rest and peace it has always provided but, in addition, it has provided some of my best fly fishing memories. I cannot wait to return.

The melodious ring of an accidentally set alarm clock suddenly plunges the Naude household into unplanned, undiluted chaos, shattering the early morning peace and quiet with the now very familiar tone that we abundantly listened to the previous day. With my thoughts still asleep, I could think of only two things; grandmothers can buy really weird gifts and children, especially small ones, are like the sea – you should never, ever turn your back on them! The pleasant chatter of the children and the inviting smell of hot coffee finally gets this house guest going, with the normal hustle and bustle of busy farm life making the household seem like a gigantic living organism, freshly hatched and rapidly awakening to the new day. The scrumptious farm breakfast is an unhurried affair, preceding a day filled to the brim with wide-open blue skies and fishing opportunities to die for.

After breakfast Marli and I sauntered off to our favourite spot for some exceptionally civilised fly fishing, none of this early rising, braving the cold twaddle needed here! The little vlei below the main 18 hectare dam wall, now well-filled after the summer rains, teems with large rainbow and brown trout escapees, making for some of the best sight fishing we’ve ever had. A small neutral density dragon nymph cast along the edge of a weed bed or towards a clearly discernable fishy bulge in the shallow water, time and again resulted in a tight line with a well-conditioned, irate trout at the other end. Having had enough of the stillwater fishing for the moment, it was off to the Swith stream, the birthplace of the Luzi River, to sample some of its wily trout on the dry fly. The Swith runs in a steep valley, the marble bright water carving out the bottom over millennia, with imposing sandstone walls towering above the gorge, hiding quite a few overhangs decorated with ancient San rock art. This miniscule water has some prime dry-fly areas where a sparsely tied, stiff-hackled fly can flutter, dance and tiptoe over sparkling short runs and small pools. Watching as the fly commences its ballet over the sunlit water, can bring a stillness to the heart with almost untenable anticipation, only to be relieved by the lightning fast take of a wild rainbow trout, making the ultimate deception complete.

Vrederus is more than just quality flyfishing in virgin streams and large stillwaters; it boasts an impressive ornithological potpourri, with in excess of 172 listed bird species in the area. Around the water and on the rest of the farm one can observe some of South Africa’s rare and endangered bird species including the bearded vulture, booted eagle, black harrier, mountain pipit, black stork and the ever-elusive yellow-breasted pipit. For the photographer, Vrederus is a seemingly endless montage of scenery, with quaint pastoral scenes intermingled with ominous thunderstorms and calm, almost docile sunsets. Old farm buildings and implements make very willing subjects for abstract scenes, while the local bird life will keep the wildlife photographer more than just occupied.

On our last evening, dusk finds young Peet Naude and me back in the vlei, up to our knees in cold clear water. A slight surface bulge betrays the presence of a foraging trout in the soft evening glow, making it an easy target to reach with a single flick of the rod. Having hooked the fish, I handed the rod to my young apprentice, having him hang on for dear life. How do you explain to an eight year old that the fish on the other end of the line, trying to pull him into the water, is likely to be bigger than his baby sister? After landing and gently releasing the fish, we walked back to the house in silence, as words strangely felt out place during the making of a special twilight memory. After blissful days of top class fishing, the ever-moving hands of time has sadly caught up with us yet again, and it was time to head for home, bringing an end to a much fulfilling odyssey of sparkling rivers, streams and dams. As we drove off into the swirling early morning mist we realise that we won’t stay away for too long, our weary city souls will hopefully once more soak up the solitude and rest that one can only truly find in this part of the world, a magical place, an uncomplicated place, a place beyond the worldly grasp of words.